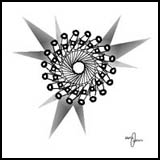 INFO:
7" vinyl originally released by Austrian label Klanggalerie in 2002, in a limited edition of 100 copies. Out of print.

Uploaded by disques_hushush on September 5, 2004